Skip to content
"Then, as reported in yesterday's Noises Off, the education minister of Iraq has banned the study of theatre altogether in Baghdad's institute of fine arts."
Sent to us at Theatre Without Borders by Prof. Waleed Shamil, Baghdad University.

Subversion on stage: can theatre change the world?

Recent events in Hungary, Belarus and Iraq show that governments find theatre dangerous enough to think it's worth banning. So what should we be doing in response? 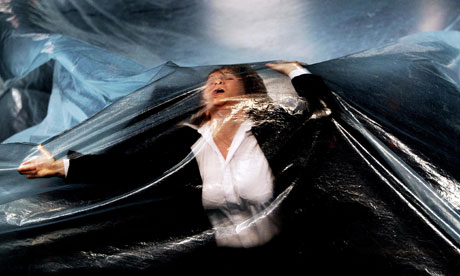 In the past month, three rather serious things have happened to what could loosely be called "the world's theatre community". In Hungary – the country that has just assumed presidency of the EU, folks – a law has been drafted that, as well as enabling the government to censor newspapers, would give it the power to ban theatre performances, while the country's parliament looks set to sack the director of its national theatre on the grounds that his work is "obscene, pornographic, anti-national, and anti-Hungarian". In Belarus, Natalia Koliada, the artistic director of the country's only free theatre company, has, following the "re-election" of Alexander Lukashenko, been forced to go into hiding, threatened with rape and torture. Then, as reported in yesterday's Noises Off, the education minister of Iraq has banned the study of theatre altogether in Baghdad's institute of fine arts.

Of course, Britain's theatre culture has its own problems, faced with a government that seems determined to turn the arts into a glossy pastime through a mix of condescension, "philanthropic giving" and sheer stupidity.

And while it's instructive, for example, to compare British media coverage of protesting students with its far less equivocal condemnation of police brutality in Belarus – apparently a savage police force is easier to spot if it's in eastern Europe – it's hard to say that problem is here .

It's hard not to feel a sense of powerlessness (both ours and theirs) in the face of these attacks on theatre around the world. The spectacle of massive, often violent, state power being wielded against the arts is a bleak one. At the same time, there is something faintly optimistic in the idea there are still places that actually find theatre dangerous and subversive enough to think it's worth banning.

So what should we be doing by way of response? On the one hand, it seems self-evident that theatres in Britain should be loudly declaring their solidarity with persecuted Belarusians, threatened Hungarians and newly banned Iraqi professors. On the other hand, what help, beyond making a comforting, self-important noise, will our solidarity offer? Democratic western "solidarity" will presumably leave a sour taste in the mouths of Iraqis, who have a government we voted for to thank for freeing up the clerics who have demanded this ban in the first place.

In his most recent blogpost, writer and director Chris Goode argues that "theatre can change the world, [and] is already doing so". Clearly the governments of Hungary, Belarus and Iraq share his belief. Clearly the challenge the British theatre-makers face in 2011 is to prove that they are right: that theatre is indeed a force to be reckoned with, rather than something that is politely paid lip-service, patted on the head, then quietly cut and ignored.

Arts and Culture for your Neighborhood Festival